“If I were pressed to say why I love him,” Montaigne wrote of his deceased friend Etienne de Boetie, “I feel my only reply could be, ‘Because it was he, because it was I.’” Friendship, real friendship, in other words, is the blurring of two souls into one where it was thought two had been. No price exacted. No interest paid.

Friendship is the linking of stories. It is a spiritual act, not a social one. It is the finding of the remainder of the self. It is knowing a person before you even meet them. I am not so sure, then, that we so much find a friend as it is that friendship, the deathless search of the soul for itself, finds us. Then the memory of Mary Magdalene becomes clear, becomes the bellwether of the real relationship.

Mary Magdalene is the woman whom scripture calls by name in a time when women were seldom named in public documents at all. She is, in fact, named fourteen times—more than any other woman in the New Testament except Mary of Nazareth, the mother of Jesus, herself. She is clearly a very important, and apparently a very wealthy woman. Most of all, she understood who Jesus was long before anyone else did and she supported him in his wild, free ranging, revolutionary approach to life and state and synagogue. She was, it seems, the leader of a group of women who “supported Jesus out of their own resources.” And she never left his side for the rest of his life.

The Magdalene factor in friendship is the ability to know everything there is to know about a person, to celebrate their fortunes, to weather their straits, to chance their enemies, to accompany them in their pain and to be faithful to the end, whatever its glory, whatever its grief. The Magdalene factor is intimacy, that unshakeable immersion in the life of the other to the peak of ecstasy, to the depths of hell.

—from The Friendship of Women by Joan Chittister, icon by Marcie Bircher (BlueBridge) 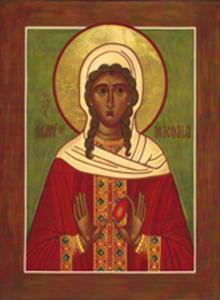